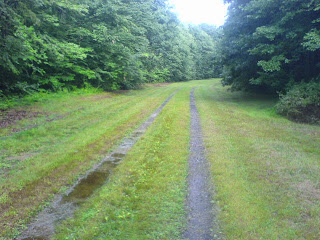 After Breakfast and a little cleanup, Molly and
I started on our Six Penny Adventure. The ranger on Friday night said there were still remains of the buildings and lake from Six Penny, and I wanted to see if I could find them. I checked the map, and found we could pick up the Six Penny Trail (orange Blaze) by following a service road near the entrance to Loop D of the campground. As we walked the wide grassy service road, 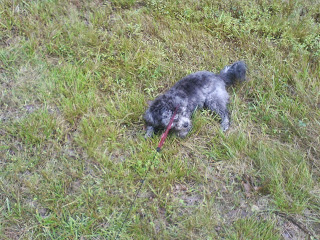 Molly must have sensed my excitement, because
she started playing her "chase me" game, which I obliged.


After a bit, arrived where Six Penny trail crossed our Service Road, and greeted a few mountain bikers on the trail (Which are forbidden on this part of the trail) We didn't pickup the trail
there, as had seen our service road became a dead end - right int
o the trail. Sure enough we picked up the trail there, where also a large water tower not on the maps resides. Soon we were into the forest, where the only noise seemed to be our footfalls. The trail started to thin, and seemed to be less used than others I've been on at the park. We also started to descend, and I new that on the way back, one way or the other - we'd need to climb again. On a water break with Molly, we spotted Monotropa uniflora (Indian pipes) 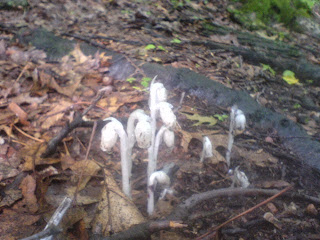 On the trek downward, all of a sudden Molly stiffened, then ran behind me. I looked at the trail below, and a large "Labradoresque" dog was galloping toward us. Fortunately he was friendly and just wanted whiff of Molly. The elderly owner panted and puffed up to us Apologizing that he
didn't "hear" us, or he would have put him back on a leash. (Molly's always on her leash - it's the rule in the park) We continued on.
Soon we heard a road, where the trail leveled off, and turned left. The trail had also started to show signs of the sandy soil of Six Penny I remembered. For a while the trail meandered on, full of various fungi and lichen. We saw a unmarked trail to the right, going down the hillside. Intrigued, I almost took it, but wanted to stay on course.
A stream ran under a footbridge, and then our trail . We saw the purple blazed Kalmia trail with it's dilapidated water fountain landmark 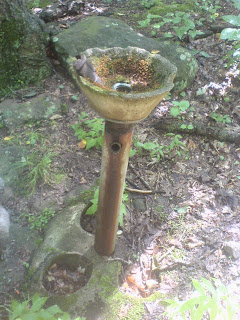 (the home of the Six Penny Diary) I felt we were almost there. We went through the undergrowth, and found our first remnants of the Recreation area.

A foundation for the area you could check your belongings while you swam. You could still see the cubbies and baskets they would use to hold your belongings. 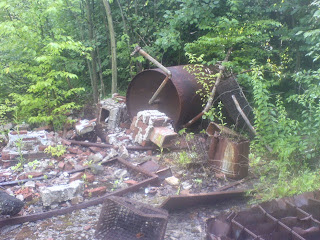 Then what I came for, Six Penny Lake itself. After descending a stone stairway we came to where I spent some summer weekends with my brother more than thirty years ago. Not much is left of the lake, it's more of a marshy, cattail filled area. I could not even make out the beach area. But the Dam area, even overgrown by wild rose, raspberry and grasses, was distinctive. I walked around the dam, and found the
macadam roads are still there, though in some places partially overgrown. There was plenty of water going thru the spillway of the dam, but I wonder if this was because of the downpours from the previous evening. Plenty of floating grass seemed to make this seem feasible. 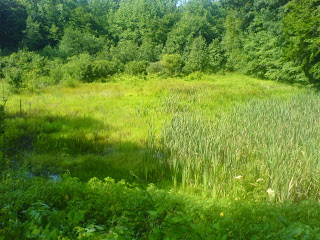 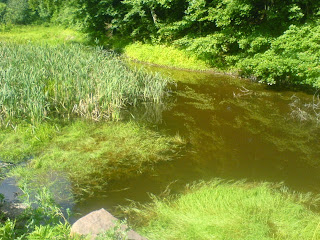 A deteriorating footbridge was downstream of the dam, and led to perhaps other trails and views that could warrant a return trip. 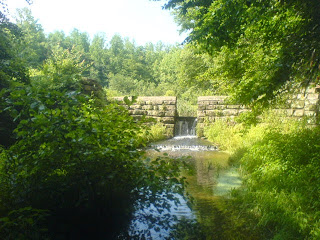 I followed one of the macadam roadways up to the old entrance off of Route 345. There would be parking to be able to check out the old picnic and swimming area without the long trek.
After a water break, Molly and I started our trek back. We continued on the Six Penny Trail, until it followed along with the Horseshoe Trail. 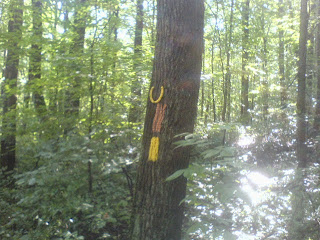 Here was our uphill, and I stopped once to catch my breath. Molly was also looking a bit tired. After the hill, the Six Penny trail took a turn left, and after another short climb, leveled off. We cross both forested and a marshy area. Within another half hour of so we were back at the service trail we had started from, and when we got back to RoadAbode, after a long drink, we both took a nice nap!
Then, time to pack up and leave. Great hike!
Posted by RoadAbode

Thanks for posting your results of searching for Six Penny Lake. I have often wondered what happened to it after the pool was built. I drive through the park sometimes, but never seem to figure out where the lake would have been.
My fondest memory of the Lake was when my brother went swimming near the reeds in the lake and got out with lots of leeches on his legs. Cool!

We went hiking along the six penny trail (8/10/09) because it was located near the campground. We arrived at the ruins of the lake and speculated at what was there. Thanks for the information, we never would have guessed what the discarded baskets had been used for.

Thanks for posting! I have fond memories of my mom taking us there to swim. We used to have such a great time and were disappointed when they closed it. Being a kid at the time we had no idea why it was closed, my mom said something about contamination from the ducks however, she thinks it was the excuse for pool funding. What a waste of beauty!!I've often wondered what it looks like now!
Thanks again

Enjoyed reading your post. I love hiking the French Creek State Park and just walked the Six Penny Trail yesterday (Dec 31). Ironically my hiking buddy's name is Molly as well. Will pick another loop and probably be out there again today. Hope to run into you and your Molly.

Thanks for your blog on Six Penny Lake! Our family used to go there in the mid 1950s with our church. I remember the "sandy beach" which I presume was carted in, and as my sister and I were little, only being allowed to go in the very shallow part.