Since there is no cell service at the top of Red Rock Mountain (elevation 2449 ft) I'm posting after our adventures.

This year I made the RPC Family Camping Trip - Past few I've had to be home for work.
We had quite a few "newbies" - families or singles that had not camped before. What made it even more adventuresome is the lack of electrical hookups at any of the sites.

However, more than half our sites were right on the lake - with lake access (for fishing or canoeing) and beautiful views. Ad to the mix the ranger's warning posters & leaflets about the resident black bear, and we had some worried newbies.
After getting families, the food site, and ourselves setup, we had a great evening meal, and a time of devotional and singing. Was a great time - Monday started with a great breakfast provided by Jack, and Steve took the kids fishing by the dam. Everybody caught at least a sunny, with Steve having the most interesting catch - a medium-sized pike.
After fishing, we planned on hiking to Ricketts Glenn most interesting feature, its multiple waterfalls. Rickets Glenn has 2 Gorge areas/streams -Glen Leigh and Ganoga Glen - that converge into a whirlpool named "Waters Meet", aptly enough. Along each gorge are several waterfalls - from six to over 90 foot tall.
Check here for more info.
However, as we headed toward the trail, it started to drizzle, and then increased to a gentle rain - and as we turned back - a steady downpour.
I headed for the showers since they'd be empty - knowing most campers huddle down in their tents and try to figure what to do in the rain. I figured the storm would be over in an hour or two. I was wrong. Not only was it raining - hard - but the temperature was dropping. I also found out that some of our young newbies and one leader had headed out on the trail anyway, and were now somewhere in the downpour.
It became harder for people to stay dry and warm. By nightfall, 4 families had made the decision to leave. I don't fault them - wish the weather had been better...
After helping some families pack their tents - in the rain - and then a great dinner of grilled Pork loin, pasta salad, and vegetables - I was having a hard time staying warm, and by after dinner - just wanted to crawl into bed. I managed to do that after helping to cleaning up the food site and being social for a little while. The girls and Bobbo played cards in RoadAbode for a few hours before hitting the sack.
Rain ended around 3 or so Tues AM
And Tues Was ABSOLUTELY Beautiful!
Breakfast was made to order eggs, by Jack - with plenty of bacon & sausage. Tried some poached eggs on toast for the first time (a lot like softboiled!)
The sky cleared beautfully, and after breakingdown the food site and campsites with the last families, we cleaned & packed ourselves up and drove to the trail head of the Falls Trail.
We hiked to Ganoga Falls, - which while not the whole hike around both gorges, gave us some beautiful old growth forest and gorge views. Jack and Family (both children under teen years) left earlier and did the whole hike - and we actually met up at Ganoga on their return trip. Made me feel wimpy :-)
After our hike, we stopped for some lunch at the Lake Rose Consession stand (good food!) and Emily took a dip at the Swimming beach. Before heading home, last stop was to the Park office to pickup some souvenier patches and shirts. Rangers let us know we had just missed the bear too!
Have a few pictures of our adventures: Top of the mountain
Posted by RoadAbode No comments: Links to this post 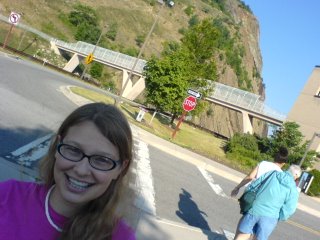 So far - Sidling Hill MD
Posted by RoadAbode No comments: Links to this post