The Case of the Missing Catalytic Converter and Repair Drama 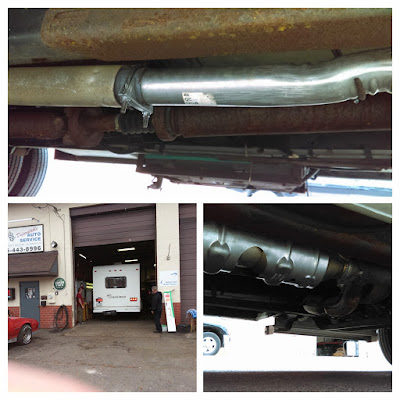 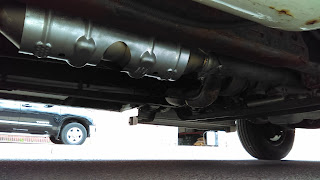 How'd We Get to Here?

It's been a long time since posting. Too long. It's not that we've stopped doing things with RoadAbode. It's been that there has been a shift in responsibility and priority.

The place I have worked for as the IT Administrator for over a decade was acquired by a larger company. Now in my fifties, my job has changed. I need to learn new technology (to me), new interfaces, new software. I have to adopt new responsibilities. I now travel to other offices to help in upgrades, moves and expansions. In the past few months I've added up more flights and hotel stays than in all my previous time spent on this earth combined. It's not that I haven't wanted to write, it's the time to do so.

Let me try to catch you up.
In 2015, RoadAbode had two blowouts - one on either side of the rear. Two different trips. The second one in November also took out the sewer gate valve. Fortunately we had just flushed the tanks for the winter. It also took out part of the wheel well trim.  Hope to write about the adventure of replacing the sewer parts soon.

As usual, we did little in December, January and February with RoadAbode, and even less because I was travelling for work across the country. Birmingham, Los Angeles, and Buffalo to name a few - but I mostly got to see the inside of airports, office suites, and hotel rooms. Not much sightseeing. Do feel blessed to be working with a good team of people. Makes working until 2am some nights bearable.

The week before our first trip in March, I visited RoadAbode to do a "pre-road trip" check. Found out when I started her up that someone had helped themselves to her catalytic converter. Bit upsetting since we keep RoadAbode in an access controlled, fenced in storage facility. Unfortunately the time-frame was so wide we couldn't catch the culprits on the storge yard camera. March's trip was cancelled since we could not get a reasonable estimate, nor the part before the trip. We've since replaced, and perhaps will blog the account how Amy got the job done.
My travel for work also caused my decision to step down as board member of a local theater group, ASH. I felt I could not give the correct attention to the kids outreach that I would like to.

We finally did have a great weekend out to Lancaster in April. Thrift shopping and visiting some eateries. And some Snow too!

May's trip was for Mother's day, and enjoyed a time next to the Swatara River at the Jonestown KOA.
So there has been a good bit of adventure, and not as much travel in RoadAbode - but summer is almost here!
Looking forward to an upcoming trip to Amherst, Massachusetts - home to Emily Dickinson and the  Eric Carle Museum of Picture Book Art. Hopefully I can share the experience here.

It took a day off to recoup and get the time to write to write. hopefully I'll be able to chronicle what adventures are headed our way with RoadAbode. It's fun to look back at the past eleven years and see how much we've enjoyed the time in RoadAbode! If not, at least I'll try to post a quick picture on Instagram or Twitter. Follow along!


Posted by RoadAbode No comments: