Amy & I got the idea to take some friends - Jeff, Rachel, Sam & Elizabeth - to Zerns for an evening of browsing and people watching. By incorporating RoadAbode in the mix - it was a really "Neat and Sharp" night out! Amy decided to make a turkey dinner to share - with special desserts from Zerns bakers. And I collected some quirky questions for a Zerns Scavenger Hunt. Picked up Roadabode around 2pm, brought her home and gave her a quick scrub down to get rid of blackstreaks - loaded up and met everyone at Roxborough Presbyterian Church parking lot @ 4pm. On the way we played RoadAbode Bingo, some old school video games (like Pac-Man) and had some snacks. We arrived at Zerns about 5:15pm and planned to walk around and check out the wares till 7pm - have dinner in RoadAbode - then wander around a little longer.
Got a great parking spot near the outdoor flea-markets. Amy & I wandered around, picked up some small 'prizes' for the Scavenger Hunt and then came back to RoadAbode to ready dinner - which was warming in the oven. Amy completed the stuffing, gravy and corn, I set the table and the welcome mat outside. Jeff & Rachel showed a little early, so we setup some chairs outside for them to relax in while Amy finished up inside - and I went to the closest baker to pickup some pies. Coming back to RoadAbode was great - seeing Rachel and Jeff relaxing outside - Jeff strumming a guitar - Just felt homey and so right!
Soon Sam & Elizabeth showed - We prayed together and enjoyed a great meal, and laughed about the sights and experiences that are uniquely Zerns - topped off with shoo-fly pie. We sent our guests back into Zerns, we cleaned up, relaxed, and when they returned, rewarded our Scavenger Hunt "winners" They also gifted us for our hospitality, with a special "Jesus soap on a rope" to help keep us "Spiritually Clean" (Where else but Zerns?)
We left - took backroads home, and just enjoyed some great conversation.
Definitely want to do this again!
Posted by RoadAbode No comments:

Got up early, enjoyed breakfast and we were off. Hershey HighMeadow is not a bad campground - (Do need to understand you are next to a freight train route though!)The staff friendly, playground equip. Pretty new, not broken, and the shower houses are fine - could stand an update perhaps, but setup well. Campstore is well stocked. The shuttle to the RV show is downright luxurious - a charter - type bus. Got to the Registration area before the show opened. Stood in line and chatted with others there. The girls got kudos for how well-behaved they were, by a school teacher. The woman also said how well we spoke and included the girls - and instructed them on their behavior. As a parent - that's great to hear.
I decided that the first thing in should be what Kimberly wanted to see (Emily didn't care) So once in the show - we hopped on the tram to stop #4 for the Anderson Mobile Estates. These are highly specialized trailers used by actors - like Wil Smith or Robert De Niro. We had to wait in line - they were not quite ready for guests. From the outside the trailer is amazing - two stories tall - with
multiple slideouts on the first floor.
Once inside we were met by the owner of the company Ron Anderson - that was a surprise! I was thoroughly impressed with his presentation. A down to earth guy, Ron explained how everyone talks about the $$$ this thing costs, no one explains about the engineering involved. His background, alongwith his father was in aircraft design for the coaches. His original start working with "Hollywood types" was as a tour bus driver - and his wife (also down to earth - extremely nice) was the makeup artist. From those experiences and connections he built his business.
The trailer itself was amazing, specialty woods and leathers, all created to be ingeniously packed up - from two stories to one. I think it had more square footage than our house! Go to his site to check them out!
After our 45 minute tour with Ron (He's Thorough!) the show was a bit of a blur - but here are some highlights:
We Saw quite a few Class A's that are built for families - with both Queen bed for mom & dad, and bunks for kids! Really nice were the AllStar and BayStar by Newmar, and the 35J by WinabagoFor some reason, Emily liked to do a dance in each Shower stall... 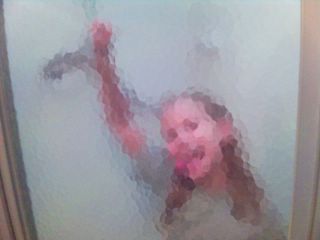 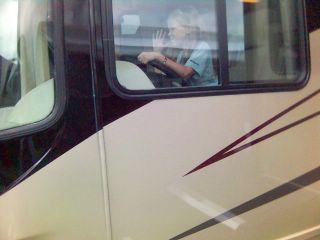 RV Show
Took off from Work Friday to pickup RoadAbode. Still had to go work in the morning - the person who usualy switched the AM backup for me was off.
That was OK - Going to RoadAbode is on the way.
After picking up RoadAbode, got calls about one of the remote offices having connectivity issues to one of our databases. That too was ok - I fixed when I got home. Once we packed in our clothes, and the girls were picked up from school - packed up and fed - we were off. Rained pretty much all the way up - sometimes hard.
Noticed Gas is a bit cheaper in the Hershey area - which is good. Once in Hershey, Stopped at the place requested by the girls for dinner - Pizza Hut. After dinner, filled up on gas 2 $2.45. Got to the Campground a little before 5pm. Was still drizzly, so we rethought going to the show for the "Twillight Special". Kimberly did homework, and Amy, Emily and I took a walk down to the playground and Campstore. Got some inexpensive Hershy IceCream for dessert! Plan on turning in Early So we can get to the show early am tommorrow.
Posted by RoadAbode No comments: