While at the Valley Forge RV Show in Febuary with Frank, saw a 2008 Jayco Greyhawk. It was a great deal with lots of ammenities. One feature that really struck me was the Greyhawk's "Dream Dinette". The ability to slide into the dinette without hitting the leg of the table, and the ease to raise and lower the table to use the dinette as a sleep area.

The next week, the table was still on my mind, so I started research, both on RV.net and just doing some Google Searches. Found out soon that quite a few manufacturers use the "Dream Dinette" in their models. so I tried to find the company that actually made the mechanism for the table. Took some digging, but finally found on a RV industry website that Cass Hudson Co. has the actual Trademark on it. Emailed, and finally called (when I got no response from email). Spoke to Darren, he gave me specs to decide which of two models would fit RoadAbode.
The Mechanism is $125 plus Shipping.
What measurements they needed:

Floor to the bottom of the Window Frame
Floor to the "Cleat" on the bench of the dinette (the Cleat refers to the piece of wood/trim that holds the table in place when you make the dinette into a bed)The mechanism weighs about 16lbs, so Darren said I needed to reinforce the wall.
I took a trip up to RoadAbode, got measurements, called Darren back, and ordered. Within a few days, the "Dream Dinette" mechanism was delivered - What follows is the install process for the new table.

The Install
One thing I want to make clear - the steps I'm documenting would probably not be sanctioned by the Carpenter's Union. I can do basic builds, but don't have the skills to do anything advanced. 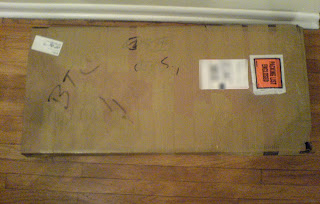 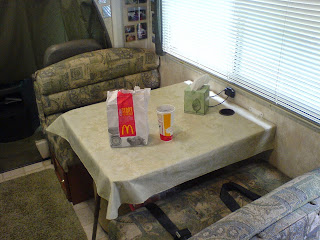 On Saturday, headed up to RoadAbode with tools and the mechanism. On the way, went to Lowes to grab a piece of Wainscoting, screws, some Gorilla Glue, and new screw bits for my drill. Stopped at McD's for a quick lunch, not my usual fare, but close to RoadAbode. Picture above is the last lunch on the "old table" - actually same table, 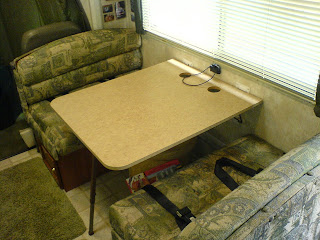 Here's the Old setup. The leg would get in the way, made it hard to pull out the storage ottoman, and was something we just had to be careful of. Also the brackets were a bit "rickety", a bit worn looking, and tough to get into the bed position 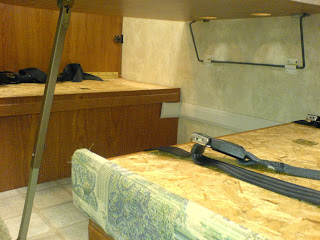 View of the old setup from underneath, The white rectangular part conceals the electric cable from the inverter to the entertainment center. 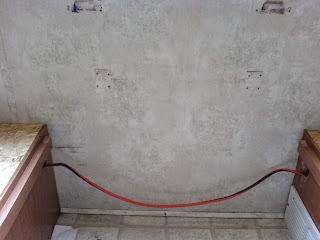 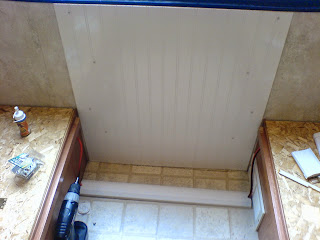 Wainscoting fitted into the space between the two dinette benches, under the window.  Used Gorilla Glue and Screws to secure to the wall. This is to strengthen the wall for the bracket connection. 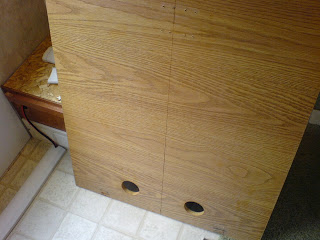 Once the wall was prepped, I marked a center line on the underside of the table to aid in making sure the bracket mechanism is lined up correctly. 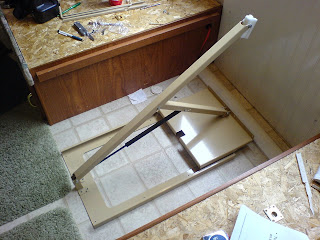 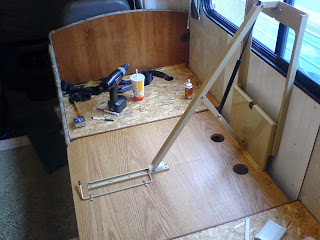 Attached the back end of the mechanism (what attaches to the wall) flush to the bottom of the tabletop. - I moved this later - will show why. 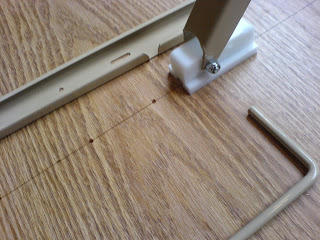 This is the slide track and locking bar. Using the center line I had drawn earlier, I marked holes to drill, then attached the slide bar, with the slide inside. 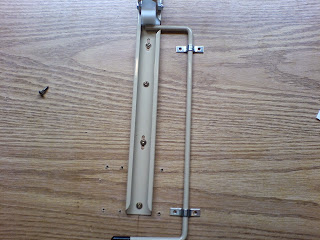 Here's the lock bar in place, the slide, and slide bar. Went smoothly, but I almost re-positioned because now the table sits 2 inches higher. checked with the boss (Wifey) via phone, she okay-ed, so it stays. =p 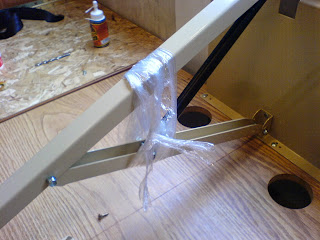 This part was not in the instruction manual. The mechanism mounting bracket, causes the table to be approx. 1.5 to 1.75 inches away form the wall. to lessen this distance, and still allow the mechanism to slide, I re-used the elastic wrap the unit came in, and pulled the armature closed. this allowed me to shimmy the bracket back, and once tightened, made the gap between table and wall about .5 or .75 of an inch. 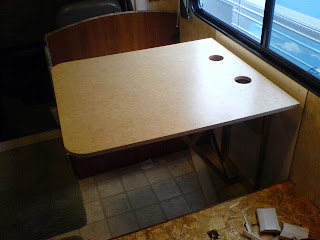 Table up and in!. Still need to finish adding mounting screws (only 2 are holding it to the wall in this picture, there are 13 when it is done. Table now sits at 30.5' tall, use to be 27.5", and converting up and down is a much smoother operation. 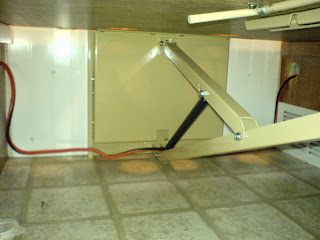 Underneath the tabletop, when made into a bed. will need to secure and conceal the electric cable - old way will not work anymore. 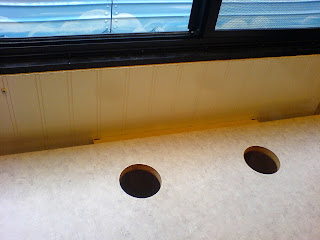 The "gap" behind the table. May put a piece of board or something decorative there. 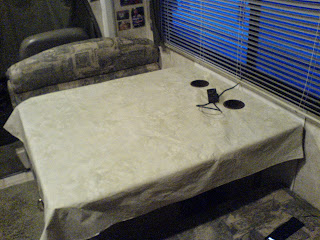 Table up and ready to hold it's next meal, or a good card game. The black item on the table is the volume control for the entertainment center, and also provides a headphone jack. Ties into the speaker system, which is actually a nice sound system (with woofer too) from a computer system.
Got to RoadAbode at 1:30pm, had lunch, got all my supplies together, and started at 2pm. Was done and cleaned up by 6pm. Would have been done faster if I didn't have to take a break when the battery on the drill died. Total cost is under $170.
Cass Hudson did a great job on the instructions, Darren gave great tips and customer service, and the product is well made. Look forward to using this year.
Posted by RoadAbode

We use the space under the table for storage while traveling. Does the center bar divide the under bed space so the area is split in two? Excellent intructions by the way.

For us, when traveling, we have the table up (sometimes the girls sit an read, or play a game while underway. We store a few storage boxes, and an ottoman under there - they still fit. When made into a bed, the armature does cut the area in two, the ottoman is too tall to stay anyway, but the storage boxes are short enough to still fit. BTW - the ottoman also is storage - holds 2 or 3 extra "lap blankets". Thanks for your comment!

That is a perfect walk through-- thanks for your time! Our dogs sleep on the bed it this new set-up will make life a bit easier.

Thanks for the blow by blow and tips. Got mine! Can't wait to install! Did you know Darren's wife had the idea for the Dream Dinette! Female ingenuity rocks!