Headed to the "Land of Chocolate" - Hershey PA, this Weekend. I really enjoy Hershey in the fall, and this weekend did not disappoint. Added bonus was the RV Show was at the Giant Complex, and was for us the featured attraction. We drugg some friends along as well. Had a Water and Electric Cable Spot, and they a cabin.

Even though I took a half day, we still didn't make it up there til after 8pm. K stuck at school, and picking up my buddy Kev and son L slowed us down a bit (His wife Leanne came up Sat after lil K. Swim Lessons) After figuring out how best to strap a car seat to the dinette (a feat accomplished by AM) we were off down the highway to Hershey. Taking the Turnpike to Lebanon/Lancaster, then following the signs to Hershey was a pretty direct and easy route. Passed plenty of farmland, but they are building a bit of it up with new homes. Passed the Milton Hersey School and Hershey Medical Center along the way, both pretty impressive for being out in the "country".
After setting up the basics, and Kev got acclimatized to the cabin (Was one spot further away than expected) I picked up dinner at Pizza Hut - Two cheese crust-filled pizzas - and headed to the porch of the cabin to munch. The cabin is a nice setup, a porch with table, a front room with Bunks, Table, and refrigerator, and a rear bedroom. They have air and heating as well, but no running water.
We all settled in after eating by around 10:30pm or so.


Saturday Morning, we got Molly out for her walk, and got coffee and tea water on. Am made a great breakfast of eggs, sausage, and pancakes - some even with chocolate chips or walnuts. After breakfast cleanup, we headed to the RV show. Caught the shuttle over and made it to the show by about 10am or so.
It's interesting when you see a sea of people waiting in line, but get to zip by - the campground shuttle had it's own entryway, so we were in pretty quickly. First place we hit was where K wanted to go, Newmar. Sadly, we found out they are discontinuing her favorite Model - the All-Star. The mid-engine Spartan chassis are no longer being manufactured, so the line needed to be discontinued. It was a really innovative platform to design a motorhome on!. They did have Baystars and CanyonStar available to check out though - some with bunks like what we are currently intrigued with.
The girls wanted to show Kev the Seasonals with the second floors for kids, and we also got to see some ultra lite hybrids and Winnebago's offerings. Between potty breaks I picked up some New England Brochures in the Giant center for next years trip up that way. Didn't really see anything vendor-wise that interested me. We received word that Leanne and K were just about at Hershey, so we hit back toward the shuttle to the campground. Once they got their things in the cabin, we enjoyed a light lunch together and just caught up a bit. After lunch, it was on the shuttle again, but this time to ChocolateWorld, where you learn how Hershey's Chocolate is made. A fun ride thru the "factory" and best yet at the end - free chocolate! This time around it was a handful of kisses that we each received. After our ride, lil K and E became "factory workers" and packaged up some kisses - with some special love thrown in for good measure. After our chocolate adventures, we went back over to the RV show, and took in some of Tiffin's and Roadtrek's offerings. Tiffin really had some great features at their site - beautiful motorhomes! Roadtrek, which specialized in B class motorhomes, had interesting concepts, but still a lot of money for what you get. But if I won the lottery I'd get a Tiffin with a RoadTrek Toad! We wandered around just a bit more, but the little ones got tired pretty quick, and that leads to either nap-in-place, or a bit of the crankies. So, didn't see all of the show, but how many slide out/dinette table bedroom/bath combos can you look at?
One cool little A class we saw was the Avanti by Damon This little diesel-powered wonder had a decent amount of space, with a cool pull down bed over the driver and passenger. Great wrap around booth as well. They called it "Yacht Styling". Claims to get 14mpg - not to bad for a home on wheels! Wonder what the ccc on it was.
We headed out and home for dinner between 4 & 5 pm. The little ones got their first ride on a "yellow cheese bus" - our shuttle was a commandeered school bus. After I chucked some charcoal in the fire pit, Kev channeled his inner chef and made some great brats and cheeseburgers for everyone. Coupled with some salads, beans and chips, made for a good meal. Topped off with a little zinfandel or wine coolers, was a nice night. And for dessert/ s'mores, and a little later a treat of ice cream at the camp store, on Uncle Kev and Aunt Leanne. Thanks guys! Grabbed a shower at the office shower house (think it's nicer - and warmer than the others.)We all retired pretty early, and covered up as the stars came out and the cool night air made us snuggle under the blankets or sleeping bags. Slept pretty well, except for the train or two that passed in the night. An active freight line passes by the campground - and this year seemed nosier than other times we've been here.
Sunday had another great breakfast of pancakes egg and sausage. Seemed there was more of a chill in the air than the previous morning. The kids didn't seem to mind, but parents chased after to keep 'em warm anyway.
We headed over to ChocolateWorld to do the ride- again - and do a bit of shopping. We also decided to do the 3-d movie they have. It was much more fun, but every bit of hoke-y that I expected. Girls really got a kick out of it. After buying some snacks for on the way home, we hopped a shuttle again, and headed back to camp to pull out. Kev, Leanne and family left before us and we shared hugs and goodbyes all around. (we still had to dump and hook up RoadToad, no use in waiting for that)

Ride home after hooking up (dumping and Hooking RoadToad took about a total of 30 min) was nice and easy. As we passed signs for Hopewell on the Turnpike, I tried to entice the girls to play hooky and camp out another day and do some hiking. They wanted to get back to go to school! What's wrong with kids today? =p
After dropping of RoadAbode, we were home and comfy by about 5pm. Great weather, Great Time, Good eats, Good Company. That makes for a Pretty Awesome Weekend! 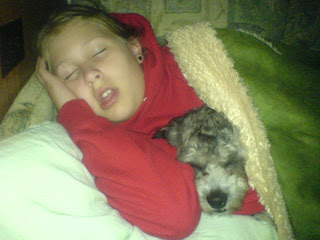