This was Molly the Pup's first Camping Trip. This weekend, we headed up to Country Acres in Lancaster Pa (Gordonville). The weathermen were calling for rain, and for once they were right. Most of it though was during the night, so I was able to sleep to that soothing "popcorn" sound on the roof of RoadAbode. Molly enjoyed her longer walks, and trying to figure out how to catch a robin...though she never even came close.
We did our usual Friday night pizza (Chicken ranch from Paradiso Pizza in Paradise) and enjoyed watching a bit of cable. I tested out my crazy "Using a monitor for a TV" idea, The picture was beautiful with the External ATSC/QAM TVBox I had connected. But it would not pick up in either mode the "default" cable channels - like Discovery, History, Nickoloden, or Animal Planet. Guess those are broadcaste by the cable companies in NTSC. Will return that, and guess I'll need to try the TV/monitor Route. If I do that - I'll post (with pictures) the install process.
With the overcast days, was nice to just sit back and read a bit. I made a nice fire, and sat by it, keeping my feet and legs warm, as I delved into the world of William Least Heat-Moon, writer of "Blue Highways", a bestseller from back in the 1980's. A great book for those who travel through those little-known towns of the US - or those that wish to... I've been to a few of the back roads of "Blue Highways", and hope to one day travel many more of them. The book is a chronicle of Heat-Moon's 13,000 mile journey, the people he meets along the way, and the discovery of himself, as he steers clear of cities and interstates, avoiding fast food and exploring local American culture.
This weekend, our meals were pretty simple fare. Egg, sausage, bacon and bagels for breakfast one day, cereals the next - Chili over pasta for dinner, with pretzels and pistachio's as snacks in between. We only left camp once - and that was to check the Black and Decker Outlet for a "Welders Glove" (didn't have any) and to pickup dessert (mix of cookies) from the Pepperidge Farm Outlet.
New Table worked great! Everyone likes how it works, too.
Travels home were pleasantly un-exciting, Molly and Em slept, while Kimberly read, and Am and I listened to an old "fiddle music" CD found on board RoadAbode. When we got home, and unpacked, hear on TV that there were tornado warnings in Lancaster! missed that excitement by a few hours - which was fine by me. We did see the storm move in at home - and Em even captured some pea-sized hailstones.
A restful weekend - only checked in once to work, and didn't even really post or surf til home.
A Few Pictures: 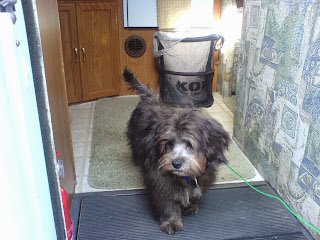 Molly Getting ready to go out and chase Robins. 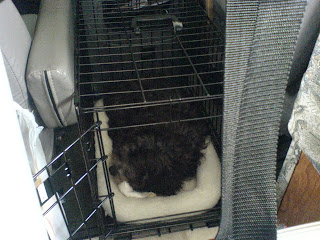 Molly's "room" between the driver and passenger seat. While on the road, we moved it to under the dinette table. 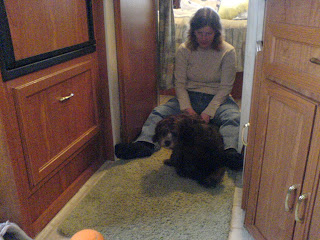 Molly and Am having a game of catch in the "hallway"
(Not really a hallway. more like Am is at the base of the bed, with the shower to one side, and the bathroom to the other, and then starts the kitchen. Gives "cozy" a new meaning) 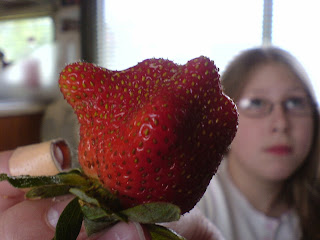 Em and her mis-shapen strawberry. Reminded me of something from the Simpson's
(Like their three-eyed fish) 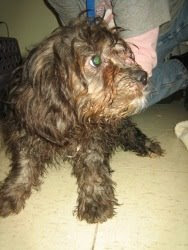 Meet Molly, a LhashaPoo Pup, five and a half months old.

She's still a bit shy, but is sure to be quite friendly and outgoing.
The Girls saw her online, and Amy met her and decided to take her from a Rescue Kennel in Chester Springs PA yesterday. Took her straight to the vet - where she got a clean bill of health.
This isn't spur of the moment, the girls have been researching for a few months about dogs, rescue, and what breeds would be a good fit for our family.
I think they did a great job, and look forward to travels with Molly.
BTW - Her eyes are Chocolate Brown - it's how the flash caught her.
Posted by RoadAbode 2 comments: