At French Creek State Park Campground for the weekend. Was suppose to be a “guy’s weekend” but other obligations kept Frank and Kev away. So it’s just Molly and I.
Got here around 7:30p Friday, and had a basic setup done by 8:15p. I had left RoadToad by the Amphitheater, so we walked down to retrieve her. Just then a ranger was giving a slide show on the “Four Seasons of French Creek” so we stated. Molly was very good, not barking or bother people.
Afterward talked to the ranger about Six Penny Lake, and also asked if the beavers were still active onHopewell Lake. She let me know they are, and that they moved to a new lodge on the west side of the lake. We took RoadToad back to camp, and got to bed about midnight.
Woke at 6:30a Saturday, put on a pot of coffee, and took Molly out on for her morning walk. After cleaning up breakfast (Nice egg, cheese, and sausage bagel) grabbed a bottle of water, helped the neighbor move his table, then started a hike. Decided to do the Boone Trail (Blue blazes) which passes by the entrance to the campground, and leads to the western side of Hopewell Lake. Along the way, a deer bolted across the trail 50 feet in front of Molly. After that, she seemed to look back at me more, as if to ask “this part safe to walk on?” 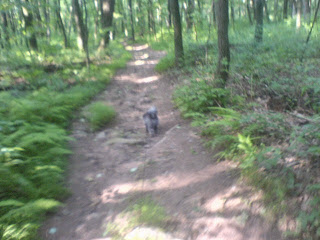 The trail was very peaceful, and I was surprised to see no one else on the trail. Every site at the campground is filled – no vacancies – and no one is out on the trail? When we got lakeside, we saw a few fishermen in boats, and walked along water’s edge toward the dam, thinking the new beaver lodge would be in the small cove there. Plenty of water lilies, but no evidence of beaver. 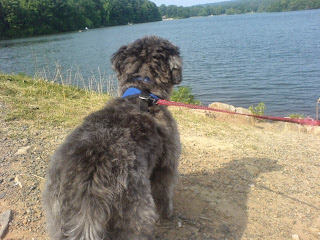 We continued along and around until we were at the top of the dam, where we took a short water break. From here, I tried gaze along the opposite bank, looking for the beaver lodge. I saw an area that might be it, so we doubled back around the lake and followed the Lenape trail (green blazes) past where it connects with the Boone trail. Finally were passed by two joggers at that point. Guess not seeing anyone on the trail is both sad and a blessing. Sad for others, blessing of solitude for me. Further up, were three young men fishing, who said they hadn’t had any luck and were moving on. 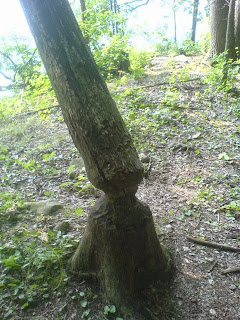 Near there I started to see evidence of beaver! A few more yards, and the beaver lodge was on the bank. The water was even a little cloudy on the one side, like a beaver had just scooted in. Quite exciting! As we continued on the path, it opened up wide enough to be a service road. It started to look familiar.
Then it opened up into a mowed meadow on both sides, and I knew where I was. This was the location of the dreaded “ants in the pants” story from my childhood! Also the place where Oma and Opa use to pick birch mushrooms, and if I was correct, around the corner was the blueberry patch. I saw the small beach, almost just as I remembered it thirty some years ago, and the path to where the blueberries would be. As I walked this overgrown path however, the landscape seemed different. The woodlands were sparse of undergrowth. In fact, signs were posted not to wander off the path as they were trying to let the vegetation reclaim the forest floor. Then I came upon a sight that looked exactly as I remember it as a boy. 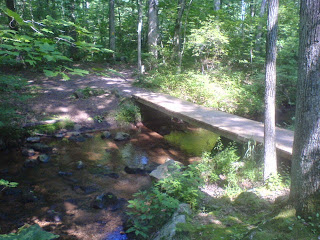 A small footbridge over French Creek. The same rocks I would trip over on the side of the bridge. I spent many hours playing in the creek by that bridge, while Oma & Opa would pick blueberries. Was also the place I saw my first water snake. Molly and I took a water break sitting bridge side. This is a find I need to share with the rest of the family, now that I know the trail that leads to it.
The hike back was not as scenic, as past the footbridge, the trail opened up again, and there seems to be some water treatment equipment now there. I use to remember interesting small vales here, filled with rocks, where you could find colorful salamanders. The trail then follows Park Road, and we took that back to the campground entrance. An interesting hiking loop. Molly was a tired pup, and is napping right now.
For the afternoon, debating what to do for dinner. Perhaps a shower is in order!