Our Annual Trip RoadTrip started Friday Night - this time starting out heading toward Skyline Drive in Virginia, and ending up in Crisfield, Maryland by the end of next week.
We thought we'd try a different approach to departure this year. We decided to leave late Friday night (about 8pm) and try boondocking at a rest stop in Maryland. It actually worked well, except for two things. One, they decided to close route 95 in Delaware for about a half-an-hour Friday night. At least RoadAbode made the wait comfy. Two, I chose to stop for the night in Maryland at Chesapeake House Rest stop - instead of Maryland House. If I would have waited and drove on for another 30 minutes, we would've had less road noise from 95, and better amenities at the rest stop. Live and learn.
As it was, it put us in a great position Saturday. 7am we pulled out from Chesapeake house and headed toward our first destination point, Skyline Drive. Only stops we made along the way were for gas at a Sheetz, and at a Virginia Information Center for maps (for the collector in the family - she didn't have a Virginia one yet). It rained off and on along the way, with a visibility-blocking downpour along a portion of Route 66. However, by the time we hit Front Royal and the entrance station to Skyline Drive, (Which was free this weekend - Thanks Ken Salazar!) the skies were starting to clear. We stopped in at the welcome center at Dickey Ridge, and enjoyed our first "Blue Ridge: vistas. We also enjoyed learning about black bear from one of the rangers, including some great personal antidotes.
We continued on, stopping at a few scenic vistas. The plan was to stop for lunch at Elkwallow picnic grounds- and glad we did. Coming to the turn in at Elkwallow the smell that hit our noses was not a passing motorcycle like I thought, but my brakes. Seems coming down, either I was hitting the brakes too much, or the caliper stuck on the driver front. As I pulled in, a cloud of smoke came up on my side, and as I pulled in to spot that fit RoadAbode and RoadToad, it plumed up a good bit. I hopped out, popped the hood, and made sure we weren't burning any fluids. But the only place smoke came from was around the driver side front tire. We ate, and let the brakes cool down. It started to rain a little also, and that helped cool things down as well.
We started out again after about an hour or so, and had no other difficulties, going down the mountain, or getting off Skyline Drive at Thornton Gap - to head toward Endless Caverns. I did downshift on a few long, winding downhills though this time - relied less on the brakes.
The rest of the ride to Endless Caverns RV resort was uneventful, and the route was easy.
Once there, we were greeted most welcomingly. First time ever - we were taken by golf cart to view and select our site beforehand. Was kind of an nice touch. (And I was not in a rush to setup - we got there by 2:30pm/3pm) The Resort is not quite a resort yet - but getting there. The pool looks beautiful, but is not done. the Gameroom is huge, but still being built. The tilework in the showerhouse is better than a home, but the building is being rehabbed. The best part is the sites are large, level, and the hardscaping around them is beautiful. This will be a beautiful resort once they get everything done. But the neatest part is the cave tour. After setting up, and talking to the nice couple next door for a bit, we strolled down to the office to take in a tour of Endless Cavern. I've alwayes loved Crystal Cave, but for size and types of formations, Endless Caverns "Wowed" me more. The "Crystal Room" at the end of the tour - with it's light show timed to music, was the top hilight of the tour, with dept, aand sheer amount of stalagties on the ceiling. Beautiful.
A full day, and now that everyone's showers are done, time to sleep and be ready for tomorrow's adventures!
Below - a few pictures from the RoadTrip so far:
Waiting out Traffic in Delaware 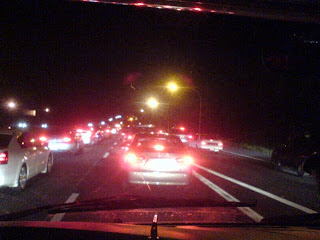 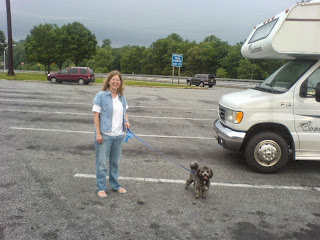 The route of Skyline Drive 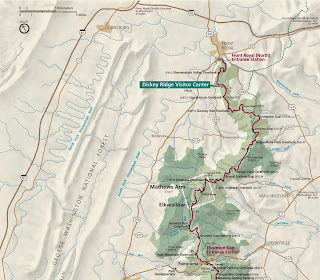 Cute Bear cub! Part of the exibits at Dickey Station 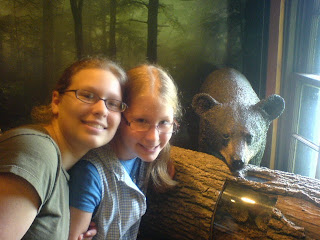 A "waterfall" formation at Endless Caverns 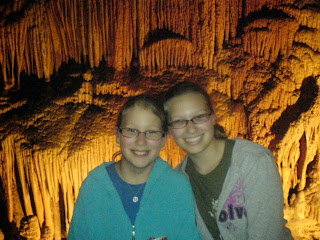