Used the air last night – was a bit humid. Got up around 8am, and Amy and I hit the showers. I went first – and discovered that the showers were not as nice as even some State Parks. Moldy shower curtains, antiquated, worn fixtures, and no where (except 2 small hooks) to put clothing, towel or supplies, no bench or shelf. Amy’s ‘shower report’ was not much better. We will use RoadAbode’s from here on in.
After showers, got the girls and ourselves breakfast – choice of omelet, pancakes, or French toast. Right before 10am, our guests arrived. After a few hellos and talk about the trip up – and the girls cooing over Kyla, (she’s a cutie!) Kevin suggested going up to Hawk Mountain. The day was perfect for it – clear skies and the humidity had definitely dropped. Amy checked at the office for ‘shortcut directions’ and we were off. It took less than 30 minutes to get there, and that was with a short stop to pick up sandwiches along the way.
I’m so glad Kevin recommended the Hike! The hike was mostly shaded, which was good, and most of the hike was not hard at all, but gave us beautiful glimpses of the valley. 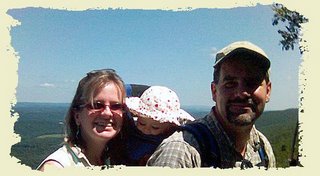 We had lunch at North Lookout, which gave us a 180 degree view from an elevation of 1521 feet. After our hike we stopped back at the visitor’s center and enjoyed the artwork there that is inspired by various raptors. Our Next Stop was Cabela’s, Camping and Outdoor Outfitters. This place was also really neat, with displays of mounted animals in pseudo natural settings. We saw everything from squirrel to moose to elephant. We also saw fresh water fish tanks, which had bass, catfish trout and even salmon swimming around.

After our trek out, everyone was in the mood for a swim. Uncle Kevin, Aunt Leann, Kyla and the girls headed to the pool first, while Amy & I jumped back in RoadToad in search of fresh corn. We found a produce stand a few miles up route 143. While there, we also picked up a small basket of peaches (yellow not white)
Once back we followed up with everyone else in the pool. Well, it seemed like everyone else in the entire campground anyway. The girls still enjoyed the dip though.
Dinner was Jack’s Pulled Pork, corn, potato bread, and a mix of refreshing watermelon, cantaloupe, and peaches. After cleaning up from dinner, we took a walk down to the office and stood in line for some ice-cream (not as easy to pickup as last night) for about 20 minutes – and the servings were smaller to boot.
We walked back to RoadAbode enjoying our cold treats. Next on our relaxing evening was a campfire, sharing pistachios, and talking about the days events.
Bedtime came around pretty quickly, and our guests got the rear bedroom, Amy bunked with the girls, and I took the jackknife sofa. Nice sleeping weather!
Posted by RoadAbode