It had been rainy off and on thru the night - but now we had bright skies above! We decided to leave around Noon, so we could do a little hiking and have a leisurely breakfast. As we met up with different campers, we started to hear how severe the rain had been - and that south of here was flooding - into PA. We did not understand the severity of the flooding. We had to stop back at the Corning Museum to pick up the girls artwork - it cooled there overnight - We then headed out 414 to I-86 to State 17 - and wanted to take it to I-81, but it was closed at the junction to 220. We decided to take 220 - Which took us into Pensylvania, and we thought to Route 6. We were detoured off 6 because of flooding - and we started to understand how high the water was. On part of our detour, we needed to drive thru the waters that were rushing across the roadbed. I could see the center line thru the murky water - but it was still unsettling. 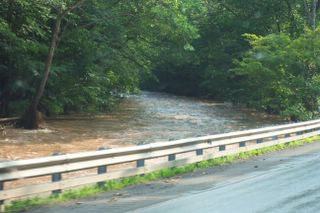 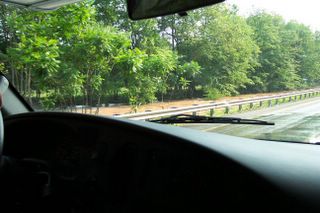 We tried to do south on State route 87 - only to be turned back. We stopped at a closed gas station, and Amy found out from some other travelers and trucker that they had not been able to get out of the area since the night before.
The truck driver was able to tell us where the State trooper barracks were, an a hospital - in case we wanted to 'boondock' for the night. 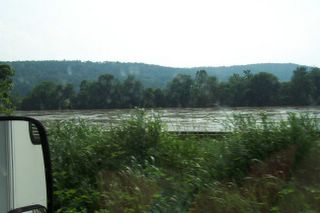 We stopped @ the barracks, and the young lady by the counter told us we would probably need to head further north and then perhaps east. She was taking many calls on the radio, so yelled in the backroom for help from a trooper. fortunatly the trooper had just came from the south, and was able to tell us that Route 29 was passable "even if it didn't look that way". We headed out and took 29 to 81, to 80,to 476 - and Home. Saw lots of evidence of the power of water - from Moved Homes, to downed trees, and mudslides.
9 hours for a trip that should have taken 4 to 5
Posted by RoadAbode