A Flower Clock, & Power From Water 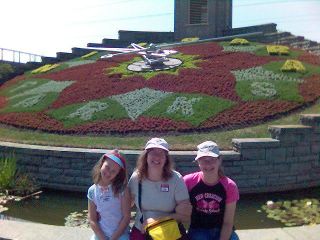 We decided to visit the Floral Clock, above the Botanical Gardens and Butterfly Conservatory today. We were one of the few on either the Falls Shuttle, or on our Transfer to the PeopleMover.
(The Shuttle Drivers & PeopleMover Drivers were more talkative today - found out the were long-timers - 25 years for one, 13 for another)
The Clock was beautiful, but really is nothing more than a really nice rest area on the Niagara Parkway.
Next to the Floral Clock is the Sir Adam Beck Hydroelectric Plants 1&2. We went in planning a tour - but saw the cost -over 10 for adults(Kimberly is considered an adult) and just didn't think it was worth the expense. Just as our driver was pulling up to our stop, I remembered that we had coupons for the tour - 1/2 price. We waved off our driver - and went for the tour. It was interesting!
The station diverts water from Niagara River above the falls and flows back into the lower portion of the river. For the first station, a long canal diverted water to the plant. For the second, two underground tubes were built to carry the water to a resivoir. 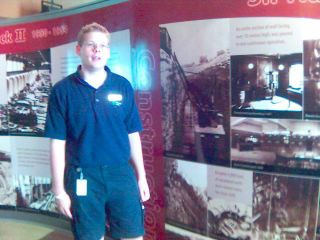 The whole process of how the electromagnets create electricity is explained realy well here. Our tourguide, Richard had a great sense of humor, and called our group the 'candy' group, because we were dicussing the differences between candies in Canada and the USA. On the elevator ride down to the plant.(their 'Smarties" are not 'sweet-tart' but more like M&Ms). The Plant #2 that we toured has 16 turbines generators, & each turbine assembly weighs in at 4 tons, and they are services each year, and totally overhauled at 7. We saw some of the machine shop - where they have a huge steel lathe to cut their own turbine shafts, and for other power stations as well. The floor of the plant is so large, that bikes are used by employees to get from one point to another.
After our tour, we decided to try a few bars of "Aero" which is different types of chocolate (milk, dark or Mint) and the center contains air bubbles. They were good, but seemed more crumbly that our hershey bars.
After our tour and snack of chocolate, we caught our PeopleMover to the Botanical Gardens, and walked about for a short time, enjoying the flower beds. We could of spent much more time there, but decided to move along so the girls could get in a swim, and then a shower.
We hopped back on the PeopleMover, Transfered to the Falls Shuttle, and headed back to RoadAbode. Swim for the girls, Nap time for the driver!
Posted by RoadAbode