We Did the First Annual BikeTrek for RPC Youth after church today.
We had only a handful - but it was a good test for a first time out. We dropped of the youth @ the Conchy Train Staion - Kevin drove the church van with some in it - and pulled the trailer full of bikes. Diane was the 'female liason" to ride with the girls. We had a few in RoadAbode and Dropped them off - then headed to Betzwood Park and 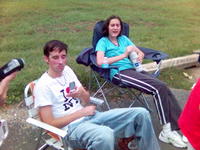 waited for them to arrive. Kevin estimated it would take 1 to maybe 2 hours for them to show. We no sooner setup camp at the Park when the first two raced in - Sam and Mindy
We got them watered and snacked and started the grill for the hotdogs. 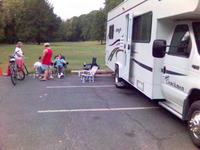 Eventually, everyone showed in about 90 minutes.
We ate, had some time for prayer, and 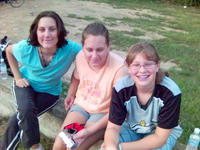 then they headed back - and so did we.
Posted by RoadAbode