We had so much fun, I really did not pull out the laptop while we were in Watkins Glen. I didn't even take many photos. Really want to post a synopsis of what we got to do - in such a short time.

Friday - Left Philly between 9-9:30am - in a complete downpour. Picked up Ed, and drove to RoadAbode. Rains really did not let up, and of course, that made hooking up RoadAbode and RoadToad difficult. EvenBrake did not co-operate either - would not complete it's test cycles. So made sure the Safety chains and all for the towbar were connected correctly, then hopped back into RoadAbode. Toweled off, and changed out of my wet outer layer. Twenty minutes later picked up Kev, and we were on our way!
The four hour trip to our campsite proved unexciting, which was a good thing. We Camped in the Watkins Glen Village Campground W.W. CLUTE MEMORIAL PARK and Campground. It was Surprisingly nice - given that it was completely full with race-fans. Yep, the weekend I selected for the guys weekend just happened to coincide with Sprint Cup Series for NASCAR. We setup the basics for our campsite - which backed up to a baseball field - and then decided to go to Corning to Atlas Pizzeria for dinner, to beat any crowds in Watkins Glen eateries.We sat in the upstairs room and enjoyed an appetizer of Italian Dip - a wonderful concoction of sausage, pepperoni and diced tomatoes blended with melted cheese – served with tortilla chips. It prepared us for the Brick oven pizza we had - an " The Atlas" filled with tomato  sauce, pepperoni, sausage, ground beef, prosciutto, red onions, green peppers, mushrooms, black olives and a blend of cheeses. It was so thick with toppings, we three healthy eaters could not finish the pie! After we had our bellies stuffed, We decided to do a walk around Watkins Glen Shopping district. We  took the short ride back to town. Even with all the people, parking was way easier than Center City Philly. The main Street of Watkins Glen - Franklin Street - Was alive with vendors selling all types of memorabilia. Everything from Teeshirts, miniature cars, to used racing tires and parts from crashes. It made for a fun evening of people watching, and window shopping. No purchases though. After we headed back to RoadAbode, checked out the Park on Seneca Lake, and then relaxed in RoadAbode - wathing a movie. Great relaxing start to the weekend. 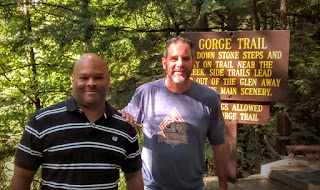 Saturday - We all woke pretty early and got coffee going. Watched some ESPN while waiting for each of us to finish showers. Then off to breakfast at Tobe's, a few blocks from the campground. Had a simple breakfast of eggs and toast. We then drove a few blocks up - closer to the entrance to Watkins Glen Gorge. Parked right next to the police station - thought that pretty safe! Even though the village was filled with race fans, parking and getting around seemed pretty easy. The Gorge is Three Miles-Round Trip, 832 Steps,19 Waterfalls. Not wanting to break a sweat, we hopped on the shuttle ($3 each) and took it to the the top of the Gorge - so we traveled only one way. Walking down the gorge - rather than up and back - seemed to be the way to go, and $3 for the ride was worth it.The driver was pretty friendly, and we talked about the Race Course, best viewing spots, and how it affected the local economy. From the parking lot at the top of the Gorge entrance, we walked a slope, past the Gift & Snack shop (still closed in the morning) and followed the signs to a set of steep steps that took us down the the water below. At the bottom, the creek is only a few feet wide, and the Pathway very stable and well built - with a wall along most of the way between the path and waters.The Conservation Corps (CCC) work performed in the park, used natural stone and mortar to create natural-looking paths, bridges and structures. The scenery was beautiful, but a little uninteresting until we walked to the first bridge along the path. Mile-Point Bridge connects a trail to the campground, the South Rim trail, and the Gorge trail together. After that point, the Gorge deepened, and we could more distinctly see the swirling patterns of the water in the rocks, etched in through thousands of years. It was amazing to see trees hanging by their roots high in the gorge, as we walked down the pathway. After the Mile Point Bridge, there were more people on the trail. Features included tunnels thru the rock, walking behind a waterfalls, and a spiral staircase built into a "cave". The views were beautiful - aways enjoy walking the Glen! After stopping at the souvenir store located by the base of the gorge, we decided to see if we could see the famouse Watkins Glen Racetrack. After asking for directions we were able to get up to see some of the goings on and walk the perimeter of the track. Getting inside - even just walking with no seats - would run $100, so that was as far as we went. Still we were able to see the big screens there, and get a feel for the action that was going to be happening on Sunday. On the way down to the campsite, we decided to stop at a winery or two. Seneca Lake has many wineries surrounding it, because the climate created by the water, slope of the land, and soil makeup are idea for growing grapes. We first stopped at Lakewood Winery, on the west side of Seneca Lake. Our server for our "flights" (a selection of wines presented for the purpose of sampling and comparison) had a great humorous attitude, and made the tasting a fun experience. We then stopped at Castel Grisch Winery. I was a little disappointed it was not an actual Castle, but it was still a great experience, and they also carried some locally made cheeses, which we enjoyed back at RoadAbode. We enjoyed watching the Hurt Locker on cable. After the movie we went to the Red Newt Winery and Cafe hoping to take park in the their "Summer of Swine" weekly Roasted Pig. The festivities were over by the time we got there, it was over. However our waitress was able to talk to the chef and procured pork sandwiches for us. With a nice red wine, made for a great dinner. We took a short ride to the Marsh park and relaxed overlooking the area off of Rock Cabin Road. Back to RoadAbode, Watched the movie "Desperado"

Sunday - Was Race day, and many of our neighbors were up and about for the Race early. We were headed away from the craziness of Watkins Glen (Thought it never seemed all too bad in the village) to the Corning Museum of Glass. First, we stopped for a quick but good breakfast sandwiches from Dunkin Donuts, and their great coffee. The way out of Watkins Glen, because of the police controlled closure of the roads to move race fans, was moving us away from Corning, and toward the racetrack. We used a few backroads and with the help of Lola the GPS, were able to get back on the road leading to Corning. Corning Glass Museum was a great experience - part science museum, part art museum, part history museum and part local village market make it a place everyone can hold their interest. Heading toward our campsite in the afternoon, we though it would be cool relax with some wine, cheese. fruit and other snacks and watch the Race on ESPN. we ended up having better seats than some of our camping neighbors who were at the race. After the race, we hit one of the interesting highlights of the trip - the Finger Lakes Distilling Company. Just as we were able to do tastings at a few wineries, we were able to do a tasting at the distillery.   The rules for spirits are different than those at wineries - only three tastings per flight - and then you are done for the day! That was fine by me. The guys went with samples of bourbon and rye whiskey - I started off lighter with Peach. and then tried the rye. I still don't drink much spirits, but could appreciate the time and skill of the master distiller. Our host was quite talkative and gave us a great history of the area, the distillery and it's owners, all while giving us information on the flavor notes of the spirits were were tasting. The last we all tried was a MapleJack Liquor - which had a wonderful aroma of pure maple syrup. - but with a kick. great flavor and warmth - we all enjoyed. We bought a few to take home. After our tastings, since Ed had been really sharing his knowledge on whiskey and the creation process, and Kevin showed his curiosity, our host took us down into the production area, where we were able to see everything from the huge still, to the vats used for the "mash" to the oak cask barrels filled with aging product. Even took a peak in the Master Distillers office to see his Whiskey Bottle collection. Quite a treat to be given such a tour! We stated on the porch  overlooking Seneca Lake for quite some time, relaxing and enjoying the afternoon. Even found out our host had a local B&B - and checked that out on our own when we traveled back to the campsite. Dinner was a local mexican restaurant - less than a mile from our camp - Garcia's. Was good, inexpensive, and we enjoyed the laid-back atmosphere

Monday - . Was our travel day back. Check out was at Noon Went to Breakfast at Tobes again, and were able to talk to a nice couple that follow the racing circuit a bit. We were going to just pack up - but we decided to do a last chance dip in the pool at Watkins Glen. Got most of the things ready in RoadAbode, then grabbed on our trunks and headed out. We got there a little early - pool didnt open til 11am. So we waited and watched the lifeguards prep for the day. Jumped in a little after 11pm water was quite inviting, and Kev entertained with some dives from the deep end diving board. I enjoyed the jets along the edge, and positioned my back by one most of the time for an impromptu massage. We stated to just about Noon and back to camp. Great hour of swim.
We didn pull out until 1pm, but there didn't seem to be a mad rush to evict us either. Most of the race fans had already left, and only the Seasonal Campers were still puttering about. Definitely a campground to stay at again. A Great Guys Weekend!. Next year, might do something closer to home - maybe a bit simpler. A Few other Pictures Below: 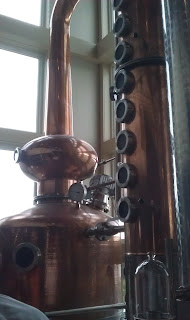 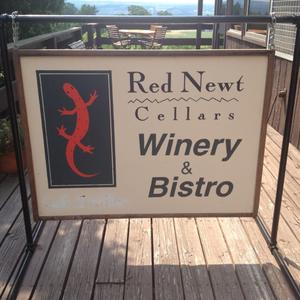 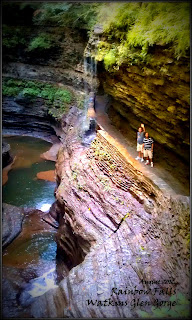 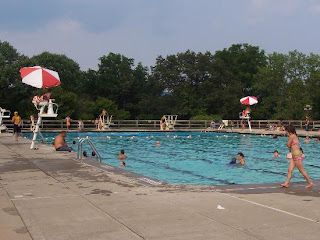