Had been looking at ways to update the existing CRT TV in RoadAbode. One way was using an Acer LCD Monitor I had. I researched and then purchased a Digital TV Coverter. picture was beautiful, for Over the Air Channells, but was only picking up the secondary Cable Channels. Plus, hooking up games or the DVD player was problematic. What was suppose to be a "cheap" solution was getting costly. Looking on the web, found a good deal on a LCD 19" Vizio TV. I also purchased a swing arm mount to hang the LCD. Some new cables, and some cable ties and such, totalled out to about $240. Once all was delivers - The install fun began!


First came the removal of the old TV and VCR. One of my objectives was to also move the component switch, electrical, and subwoofer from the cabinet next to the TV, and into the space vacated by it. i also wanted to utilize an old Laptop (since the Vizio has a monitor in) for basic surfing/search functions when at a campground that has wifi and to play mp3s when needed.
Here's the Cabinet Next to the TV - Chock-ful of equipment! 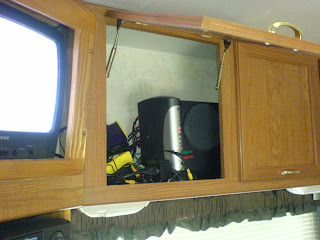 He's stuff moved over - still a scramble of wires and cables, but getting there. The subwoofer and a/v auto- switch I added velcro to - so they don't move or slide around. 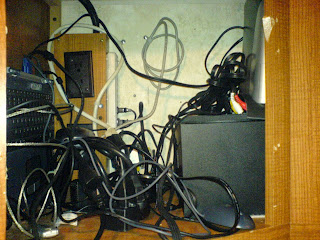 Positioned the computer I'll use in the cabinet. wedged in pretty well on it's own, but for extra protection, used some foam pieces under and on sides to help with bumping around. Connected to it are wireless keyboard and trackball, a usb wifi connector, and usb hub - so that a usb drive can be connected - or even ports for firewire as well. Connected semi- permamernt to the hub is an eight GB drive - to store apps or downloads on, without mucking up the system drive more. 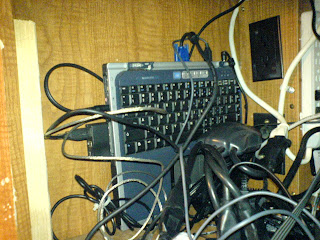 Here's the swing-arm mount for the TV installed. Wires behind are still a mess. 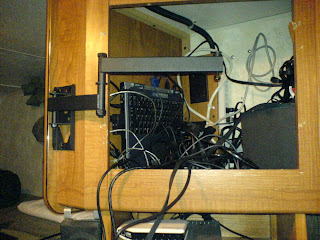 Wiiring is a little better, and you can see the foam cushioning mounted for the laptop 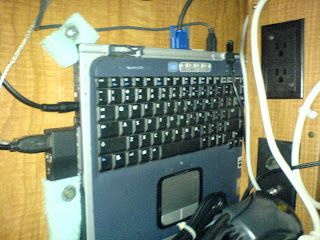 Need to post some pictures of the finished product yet - But I need to do a road test first.