Emily's hardest thing was the Anticipation. Every 5 Minutes it was "Is it noon yet?"
Not because she was hungry for lunch, but because she wanted to go swim. Amy got her into the new swimsuit they purchased earlier in the week, and at 11:50am - we bundled up and headed for the pool.
Emily was thrilled once in the building. 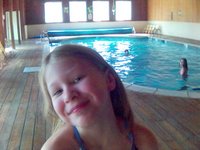 Kimberly just was not in the mood for a swim, so I decided to "Take the Plunge" with Emily.
The water felt a bit chilly at first, but we both warmed up to it really quick. The only others in the pool were two pre-teens and their mom, who was lounging in the hot tub next to the pool.
As Emily and I floated, paddled, and swam around, we found the 'hot spots' in the pool.

At first I thought they were from the pre-teens (eee-wwww) but quickly figured out it was the inlets where the pumps recurculated the water back into the pool. Nice and toasty! 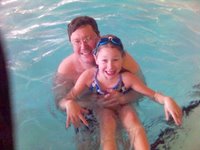 Emily and I swam for about an hour - til we both had fingers that looked like wrinkled prunes. Just then a large group came into the poolhouse - so it was a good time to dry off and head back for lunch!