After our Swim we had lunch. Amy warmed up a meal she created at home - a turkey ratatouli - and accompanied it with freshly cooked pasta. Very Tasty! we let lunch settle into our contented stomachs, (more Cartoon Network) and then Kimberly and Emily Suggested a bike ride. 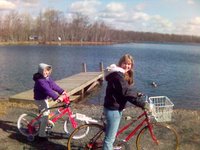 After a few false starts (stopping at the restroom, and heading back to add air in Kimberly's back tire) Emily decided she had ridden enough and wanted to play back at RoadAbode. So it was my turn to spend time with Kimberly! Amy wanted to stay back and enjoy time with Emily.


We decided to explore the path that winds around the lake. The pedaling was pretty easy, on a 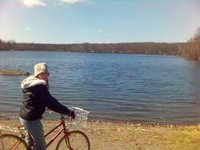 macadam path, and level. We came to a blockade for cars, but had a path around it for bikes and hikers. It was a little bumpy (ok probably a lot for Kimberly since her's is an old roadbike of Amy's) but we continued on to a beautiful clearing with a bench to enjoy the scenery. we stopped and took it in, and I took a picture of Kimberly for here. We then continued on.
The lake on this side does not have any campsites on it. In fact, the lake is actually built up and dammed higher than the land on this side. Looks like they had just done some repair work on the dammed-up part here - which made the path much more bumpy! (No complaints from Kimberly though!)
Once past this area, the ride was again pretty smooth, and passed by some beautiful homes along the shore. I'm sure they have a glorious view to enjoy anytime of year!
The path concluded across from the campstore, right by the basketball courts, and we continued back to RoadAbode on nice, even macadem.
The ride was great, past beautiful scenery, and all along the way – only saw one other person, jogging along the trail.
When we got back to RoadAbode, talked to our neighbors a bit, seemed to be avid skiers. They were giving me plenty of specs and ski stats, so I politely nodded – a lot. They were busy taking apart the ‘mud room’ connected to their trailer. Apparently a lot of skiers and snow mobilers build these so they have somewhere to shed their snow-wear before entering the trailer. Saw a few on motorhomes too. Mrs. Skier seemed to be upset that their daughter had already given up on the ski season, Mrs. Skier apparently hadn’t yet.
Amy and Kimberly shared time together doing beading (as I write) and Emily played – not really deciding which is better – outside or in. Amy and I also did a small project in RoadAbode – adding shoe pockets around the base of our bed.
Posted by RoadAbode

We missed you guys! - Glad you had fun though!