A Bad Day Camping is Still Better Than a Good Day @ Work.... 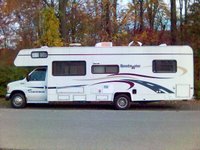 That became our mantra as we took RoadAbode out to Winterize her.
Winterizing is basically draining out all the water from the Freshwater tank and Water Heater, putting Biodegradable Anti-freeze in all the waterlines, and flushing out the Black and Grey Tanks. We also condition the coach (house-part) battery.
It was a little work, but became much easier because we parked in one of the side-lots @ French Creek State Park in Elverson, Pa. Along side the one area was a beautiful playground the girls took advantage of while Amy & I worked on prepping things. 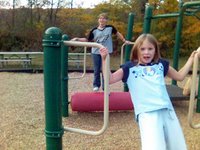 In the basement area of RoadAbode is a special connector that is tied into the fresh water system. We attach a short piece of hose and put this in a bottle of the "pink stuff" Under the bed are special valves that we turn that drain the fresh water tank. We also open the drain plug for the Hot Water Heater, and close the valve so that the water heater is bypassed. Once Both are Drained, we closed the main valve under the bed again, and started the waterpump. As we did this, we opened all the watervalves in RoadAbode one by one and let them run until we saw the pink antifreeze flowing out. We did this for the shower, the kitchen sink, bathroom sink, and toilet.
After prepping the freshwater system, we then topped off the battery with distilled water.
Amy made the girls lunch, then they helped by taking out the rugs for a 'beating'.
To finish off our "workday" with RoadAbode, we drove over to the campground @ French Creek and paid $8 to dump our gray and black tanks. 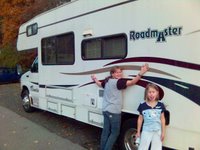