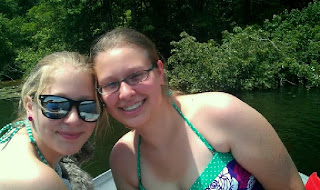 No pool, but a nice glide on Hopewell lake in a rowboat
(Edit 07-16-11) Between Being Busy @ Work, and Falling asleep WAY too early when I get home, have had no time to update the memories from this trip. While on the lake, there were many other boaters enjoying the great weather. Not overcrowded, but more than I  had see - but it was a holiday weekend. While paddling along, we heard an "Ahoy Matey" coming from a paddle-boat in the middle of the lake, with someone waving crazily at us. I think it was K who said - I think that's Uncle Frank! Looking Closer - it was! We paddled over to him and met his girlfriend and her two boys. What a Surprise! We invited them over to RoadAbode for hot-dogs or s'mores, but they declined. Made the day that much  more joyful and relaxing for me. Wish I would have taken a picture, but I'm lucky I got what shots I did with my new phone.
Posted by RoadAbode