Niagara-on-the-Lake and a Winery Tour & Tastling

Today We Took a ride - with Molly in tow -  to Niagara-on-the-Lake, a quaint Village of Shops and History located where the Niagara River and Lake Ontario meet.The town has many national historic sites including Fort George Used in the War of 1812. The girls enjoyed window shopping while Amy and I took turns with Molly. The town was a little more pricey than expected, so our stay was only a few hours. 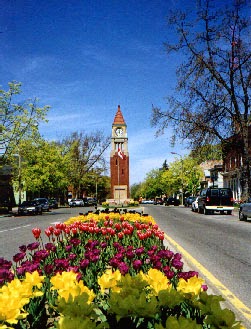 On the way back to the RoadAbode, we made a stop to a famous winery. Inniskillin Winery is the Winery back in the early 1990's that brought attention to the wines of the Niagara Region. They are most famous for Icewine, which originated in the German/Austrian regions of Europe. I had heard that their Icewine Reisling was especially excellent as a dessert wine, so wanted to find out for ourselves. We signed up for a tour, and joined a group of about twenty people. We were given an introducton to Wine making, and especially IceWine production - by Don, a very kind and knowledgeable winemaker from the Staff of Inniskillin. He explained how Karl Kaiser, an Austrian-born chemist, and Donald Ziraldo, a young Italian Canadian agriculture graduate, met and partnered. While tasting Ontario Wines in the early 70’s, they realized that they could improve upon winemaking in the Niagara Region. They seized the opportunity and set out to break new ground to produce premium wines from premium grapes grown in the Niagara Peninsula. Both Karl Kaiser and Donald Ziraldo believed their future in the wine business was dependent on using the Vitis vinifera grapes, the preferred family of grapes used to produce the fine wines in the great wine regions of the world. When sourcing these limited grapes became a challenge in the early 70’s, Ziraldo took the lead and planted a vinifera vineyard which included Riesling, Chardonnay and Gamay and formed the quality base for Kaiser to work with.  In 1984, Kaiser made the most of the extreme Canadian winter to produce his first Icewine — a pivotal point for Inniskillin.
The ice wine harvest, usually occurs Between Christmas and New Year - and in extreme cases can occur after the New Year. This gives ice wine its characteristic refreshing sweetness balanced by high acidity. Due to the labor-intense and risky production process (manual picking of the frozen fruit - usually starting at 1am in the morning)  resulting in relatively small amounts of wine, ice wines are generally quite expensive.The grapes used for ice-wine usually only yield about five percent of normal for the fruit.
Canada and Germany are the world's largest producers of ice wines. About 75 percent of the ice wine in Canada comes from Ontario. Inniskillin and it's owners were the pioneers of the industry.

We toured through the press area, the wine storage cellars, and the vineyards themselves during the education given by Don on the process. Then came the fun part - Tasting! Don taught us how to look, smell and taste a wine to get a sense of it's quality. He gave us instructions on three wines to try - a Pinot Gris - White, a Pinot
Noir - Red, and what I was waiting for - Riesling Icewine. Even though we are not wine drinkers, Amy and I both appreciated the three wines and their distinctive traits. We both agreed the Icewine was our favorite - It truly could replace dessert after dinner, with it's honey color and almost syrupy-smooth texture. very tasty!