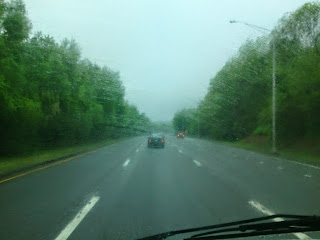 Homeward bound
After window shopping a bit at Mystic Village, we headed to the local Five Guys for a late lunch. Even though it was not the "local fare" we had been seeking throughout this trip, Kev had never had one of their burgers, and I new it would be a great treat. As we were enjoying our burgers, it began to lightly drizzle, and by the time we headed to RoadAbode, it was a steady rain. On the road heading south on Route 95, the heavens opened up and poured down. The rains slowed us down, and instead of hitting the Tappan Zee Bridge before the commuter rush, we ended up on the Bridge as the crush started. Still, we did seem to keeping moving, just slower than expected. With the heavy traffic and wet roads, we finally made it to RoadAbodes Home  - two hours longer than expected.
Posted by RoadAbode